I was updating the slides in an old presentation, and… time waits for no one.

The first image below is a screenshot from trillionthtonne.org. According to the “created” and “last edited” stats on my presentation, I must have captured the screenshot somewhere around early November 2009. (Click on the images themselves for easier reading, or, for the second one you can just click to the website itself.)

The trillionthtonne.org folks have since updated the format of their site, so I decided to update that presentation slide as well. 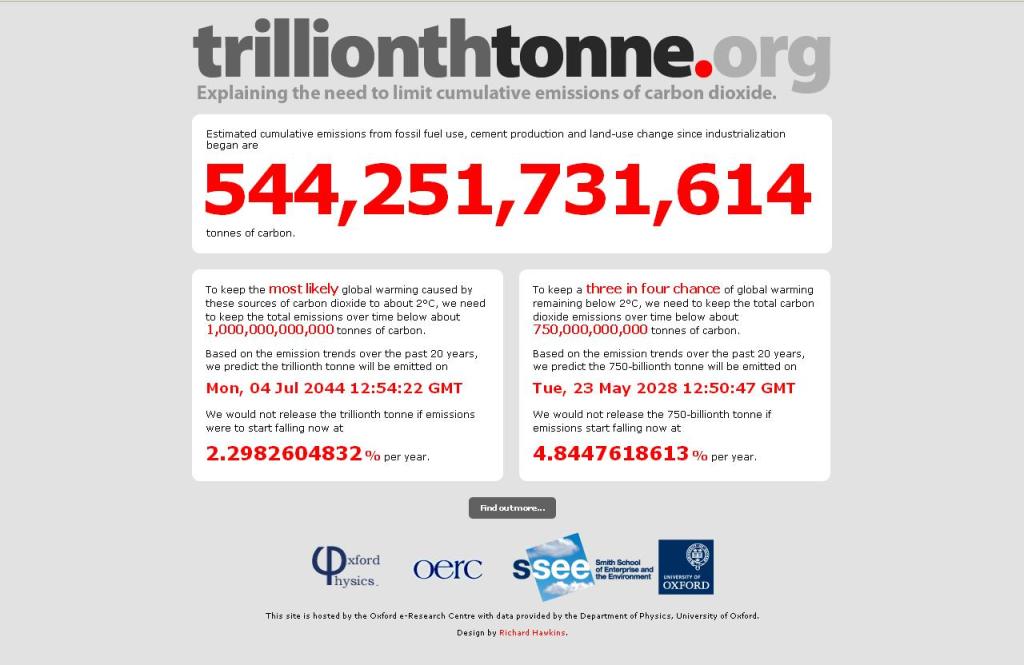 Our emissions over those 14 months have released about another 12 billion tonnes of carbon to the atmosphere. (Or about 44 tonnes of CO2 for those that are more familiar with that metric).

But look at what’s happened to the implied “remaining time” and “required rate of change” numbers.

According to the “Trillionth Tonne” methodology and assumptions, to have a 75% chance of avoiding a 2° Celsius temperature rise, the “remaining time” before emitting that amount of carbon has been squeezed from both ends because we have not yet begun to reduce emissions. Back in late 2009 we still roughly had a leisurely 18 years, 10 months to achieve that rather ambitious goal. And to avoid ever emitting that amount, we needed a reduction rate of about 4.54% a year.

Now we have about 17 years, 4 months… and, or to avoid that we need to accelerate the reduction rate to about 4.84% a year.

Want a more “realistic” target? Ok, let’s gamble and relax the assumptions so that we would accept just a 50% probability we’ll avoid a 2° C temperature increase?

For that scenario, because of inaction over the last 14 months, our “time remaining” has been reduced by 2 years. From about 35.4 years initially, to about 33.4 years now. And, again, to avoid that eventuality we would now need to kick the reduction rate up a notch as well.

I was just struck that the two snapshots are real-life, real-time reminders that Figure 22 (below)  from the Copenhagen Diagnosis is not just an abstraction. It’s a reminder that we are painting a real curve now.

Time waits for no one. “We are now faced with the fact that tomorrow is today. We are confronted with the fierce urgency of now.”

And here’s a “glimmer twins” song about all this stuff… (bonus – clever! – look for a “Tom Waits” cameo in the “Time Waits” video…)

“Yes, star crossed in pleasure the stream flows on by
Yes, as we’re sated in leisure, we watch it fly

Well, since I don’t see this up on Desdemona yet… and this struck me, personally, as particularly sad: About this time of the year in 1982, my father, brother and I travelled down the Chilcoton and Fraser rivers in B.C. The Fraser teemed with sockeye, and we saw bears all the time… It is quite unnerving to see what appear to be sudden “flips” of state in these various ecosystems…

Grizzlies starve as salmon disappear
First the salmon vanished, now the bears may be gone too.
Reports from conservationists, salmon-stream walkers and ecotourism guides all along British Columbia’s wild central coast indicate a collapse of salmon runs has triggered widespread death from starvation of black and grizzly bears. Those guides are on the front lines of what they say is an unfolding ecological disaster that is so new that it has not been documented by biologists.

and, earlier on the Fraser salmon:

No answers in B.C.’s sudden salmon collapse
This year was supposed to be a big one, with estimates predicting as many as 10.5 million fish would swim up the Fraser after spending two years in the open ocean… But those estimates have since been dramatically reduced, now putting this year’s Fraser sockeye run at just 1.37 million — the lowest on record.

Just for fun, and a test… a public post… without a topic!

Always loved this underappreciated Neil Young gem, which was first released on the “Decade” compilation. There aren’t a lot of decent vids of this one. The selection below starts a little ragged, and gets cut off prematurely, but I like it. And it’s a bit of a stretch to connect the lyrics to the blog topics, although I do think we are a real turning point in human history.

Half the time has passed away
Things we thought of yesterday
Come back now, come back now.